May 28 was spent hiking in Jedediah Smith Redwoods State Park, the northern-most in a long string of redwood parks that stretch up Northern California’s coast. A few miles inland from the ocean, the park is densely forested with huge ancient trees. In fact, it contains seven percent of all the old-growth redwoods left in the world. No roads or trails mark “Jed Smith’s” core—just pure, primeval majesty.  This hike took the expedition members through the Grove of Titans. 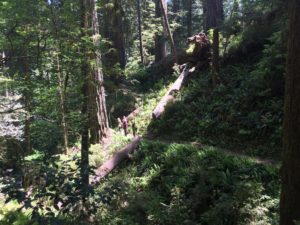 Redwood trees so big, expedition members on the trail so tiny in comparison. 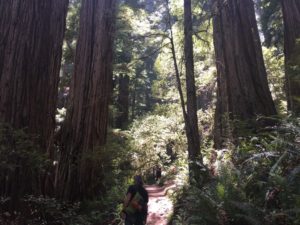 Hiking in the sun-dappled redwood forest of Jed Smith. 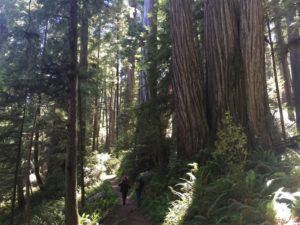 Normal-sized trees on the left. Redwood giants on the right. 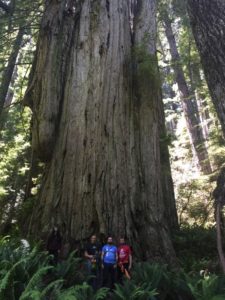 Sam, Andy, Damien and Bo, dwarfed by one of the trees in the Grove of Titans. 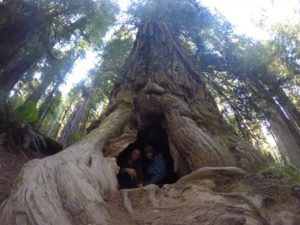 Edie and Sam in a redwood cave at the base of one of the giants.

Sam and Bo with giants towering over them. 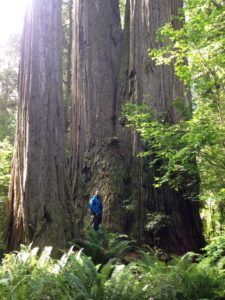 Damien in front of a mammoth co-dominant redwood. 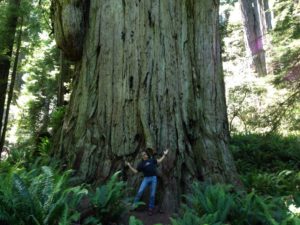 Andy in awe of the giant redwood tree he is in the presence of. 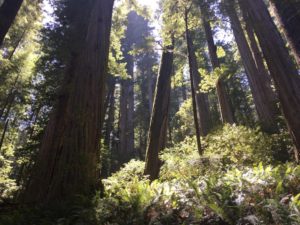 Although the expedition to obtain cuttings from some of the oldest and largest giant sequoias and coast redwoods in California has come to an end, be sure to check out the last three posts on How Cuttings Become Trees, Planting Archangel Trees and Inspiring Action.  Thank you for joining me on my travels to the Sierra Nevada Mountains where 3000 year-old sequoias thrive and the redwood forests of Northern California.  I enjoyed the trip and I hope you did too.