The 13-year-old who has the world planting trees

At the age of nine, Felix Finkbeiner hatched a plan to plant a million trees in his native Germany. Now he’s a global eco-superhero

Felix Finkbeiner in the forest near his home, near Munich Photo: Christian Kain

At first glance, Felix Finkbeiner does not seem cut from the cloth with which celebrity is fashioned.

While some adolescent boys can induce hysterical adulation in young girls, Felix, 13, is no Justin Bieber. His stringbean physique is complemented by a pair of wire-rimmed glasses and a pudding-bowl haircut. And yet, on a wet Sunday afternoon in southern Germany, he finds himself besieged by a gaggle of young female devotees.

‘I really like Felix,’ one delighted 11-year-old, Emilia Georgiev, says, beaming as she shows off his autograph.

Felix is neither child actor, pop star, nor sports prodigy. Instead, Emilia and girls like her want him to sign their copy of his book, Tree by Tree. Felix, from the unremarkable town of Pöcking, near Munich, is an environmental superstar at the helm of a global network of child activists whose aim is to mitigate climate change by reforesting the planet. Behind his apparently unprepossessing facade, Felix is really an action hero. No wonder he gets the girls.

His organisation, Plant for the Planet, recently achieved its target of planting one million trees in Germany; now, Felix is spreading his message around the world. Plant for the Planet is up and running in 131 countries, and the British chapter was established last month, with the aim of planting a million trees here over the next few years. Individuals or planting groups can either ‘pledge’ to plant a certain number of trees or make a cash donation – €1 buys one tree.

The results are logged on the Plant for the Planet website. Today, Felix is not only celebrated by his schoolmates and contemporaries, he is also revered as one of the world’s most important environmentalists, appearing on one newspaper’s recent list of the 20 most influential ‘Green Power’ activists, along with Brad Pitt (a builder of environmentally responsible homes) and the Prince of Wales.

Plant for the Planet started as a school project four years ago. ‘I was supposed to give a presentation on a Monday,’ Felix says, ‘so over the weekend I Googled stuff on climate change and came across Wangari Maathai’s campaign.’

Maathai, the daughter of Kenyan farmworkers who won a scholarship to study biology in the US, began her own tree-planting campaign, the Green Belt Movement, in 1977 as a method of tackling soil erosion and encouraging local communities, particularly women, to stand up for themselves, not only environmentally but also politically. In 2004, 45 million trees later, she won the Nobel Peace Prize. ‘She achieved so much with so little,’ Felix says. ‘So I had the idea that we children could also do something.’

His presentation about climate change went down a storm with his classmates at the Munich Inter­national School. Two days later, his teacher encouraged him to give the same speech to the school’s student council, and shortly afterwards Felix repeated the performance for his headteacher. Soon he was speaking in front of other classes.

On March 28 2007, just over two months after his initial speech, Felix planted the first sapling of his million-tree campaign – a crab apple. Today, he admits, it looks rather forlorn. ‘I wish I had known that this crab apple would become so famous,’ Felix’s genial father, Frithjof, says. ‘I would have invested in a better tree.’

News of Felix’s campaign reached other schools. Within a week he was fielding calls from students who wanted to join Plant for the Planet; others offered help in building a website. As the project gained traction, Felix began to show his ambition.

‘It began to get busy, so I said to my parents, “If we got the money for an employee, could we have one?”’ When the answer was positive, Felix called a big car company with green credentials: Toyota.

Reflecting on this now, the Finkbeiners don’t seem to find anything unusual in a nine-year-old boy asking a multinational firm for €40,000 so that he could hire his environmental group’s first fulltime staff member. Apparently neither did Toyota.

With the money in place, Felix kept campaigning, kept delivering his climate-change talk. Six months after the planting of the first tree, he delivered his message to a local rotary club. In the audience was the CEO of Toyota Germany, Lothar Feuser, who was keen to hear what he was getting for his money.

So impressed was he that he invited Felix to that year’s annual gathering of German Toyota dealers. There, the company subsequently noted, Felix made a speech ‘so compelling that participants at the meeting spontaneously pledged €11,000 in donations for Plant for the Planet’. The dealers also started their own tree-planting schemes through schools in their own areas. Suddenly the local project had a national framework.

In April 2008, Felix, still only 10, called a press conference to announce that 50,000 trees had been planted. His father warned Felix ‘not to get too disappointed if no one turned up’. But the conference was packed, and Felix’s news was relayed around the country in the press and on television. It was then that the scale of Plant for the Planet hit home. ‘We realised, “OK, this is the way it’s going to be,” ’ Frithjof says. ‘Getting media attention is easy,’ Felix notes nonchalantly.

From then on, Felix’s commitments snowballed. In June 2008 he attended the UN Children’s Conference in Stavanger, Norway, and was elected to the junior board of the UN Environment Programme (UNEP). That November, he addressed the European Parliament. In 2009 he travelled to the UNEP conference in South Korea, explaining the three-year process required to plant a million trees. With that goal in sight in Germany, he invited other nations to start their own Plant for the Planet groups. Last year, aged 12, he was a star of the Cancun climate-change conference.

Frithjof, 49, who runs an economic think tank called the Global Marshall Plan, disputes the idea that his child is in some way special. ‘Felix is no wunderkind,’ he says. ‘He’s just a normal boy.’

He is also keen to shatter any suspicion that the Finkbeiner family home is a hothouse in which the offspring (Felix has two sisters, Franziska, 14, and Florina, 12) are being artificially encouraged to blossom early.

‘Ah yes, the Steffi Graf syndrome,’ he says, referring to the German tennis player whose early career was strictly controlled by her father. On the contrary, if Felix’s career is to suffer any parental interference, it is likely that it will arrest – not assist – his ascent. His mother, Caroline, 51, says, ‘All this will stop if his schoolwork is affected.’

Meeting Felix in the flesh, it is initially hard to imagine quite how he has managed to beguile so many people for so long. There is nothing new in the facts and figures about climate change that he uses in his presentations. He is not a scientist. Get him off the topic and he sounds like any other child of his age. But start him on climate issues and a change overcomes him – he starts declaiming in the fluent, self-confident tones of the practised public speaker. He writes his own speeches, and his basic shtick is appropriately childlike in its simplicity. Global warming, he intones, is caused by too much carbon dioxide in the atmosphere. Trees capture this carbon dioxide. The answer to looming climate catastrophe: trees, lots of them.

What about the climate change sceptics?

Adults, he cheekily told the assembled diplomats, are like monkeys. ‘If you let a monkey choose if he wants one banana now or six bananas later, he always chooses the one banana now. We children [have] understood we cannot trust that adults alone will save our future. We have to take our future in our own hands.’

Felix is a gifted orator, unfettered by self-doubt, or by the complexity of the climate debate, and without the smug self-satisfaction that makes many overachieving children unbearable. He is all unaffected charm. Most of all, however, he has an ambition and instincts that are hard to characterise as anything other than political.

For example, ‘we children’ is a phrase that he uses again and again, so often that it becomes clear that, as with Maathai, he is interested in achieving the political empowerment of a disenfranchised group through environmental work. Where she championed the rights of women, he is determined that children should have a voice. His reasoning is straightforward: ‘For most adults the future seems to mean 20, 30 or even 40 years. But for us children 2100 could still be in our lifetime. For adults it is an academic question if sea levels rise three centimetres or seven metres by the end of this century. But for we children it is a question of survival.’

Plant for the Planet employs 12 staff and raises money for its trees through donations and corporate sponsorship. Felix is not discriminating about whom he teams up with. ‘We have many big companies supporting us,’ he says. ‘The problems we face are so big that we cannot choose whom we want to work with.’

His public talks may be filled with inspiring visions of the long-term future but, like any good politician, it turns out that he has eyes firmly fixed on the next move. Last month, there was a formal election among Plant for the Planet members to elect a global president. Though the result was never in doubt, there was a loud cheer in the room, at a youth hostel near Felix’s house, when his name was announced. ‘I like to win,’ he said afterwards. 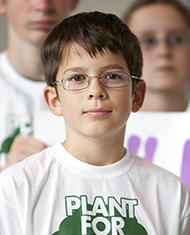 Members also elected the organisation’s first global board, 14 strong, to provide a framework for Plant for the Planet to grow further. Felix’s term in charge will be strictly limited to one year (though he will remain prominently involved in the campaign for at least the next two) and, he noted in a statement released after his election victory, ‘I am looking forward to handing over the presidency in a year’s time so that the next generation of Plant for the Planet children can take over.’

What happens then is anyone’s guess. If his mother has a say he will no doubt be confining his efforts to the classroom. But that seems unlikely. A Plant for the Planet offshoot seems certain, and Frithjof suggests that this is likely to be overtly political in character. ‘People assume Felix will go on to be environment minister,’ he says. ‘But I like to tell him that there is no pressure. Even if he doesn’t go on to do anything else, he has already done so much.’

Plant for the Planet