May 23 was the second day spent at Alder Creek grove in the Sierra Nevada Mountains as part of an expedition to collect and archive the genetics of some of the oldest, largest, and perhaps most important trees on earth – the coast redwoods and giant sequoias.  This picture is a good example what the day was like:  beautiful forest vistas with trees so huge, and climbers so small. 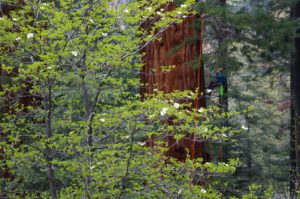 It was a day of awe and wonder as professional climbers ascended to the tops of these huge, magnificent ancient trees, some over 3000 years old.  The purpose  was to obtain cuttings from the very top branches in order to create clones of these giants with the same DNA so that these trees can be preserved in an archive for future plantings.

Here are some additional photos of magnificent trees, spectacular views and undaunted climbers. 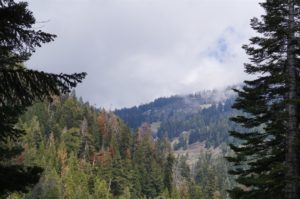 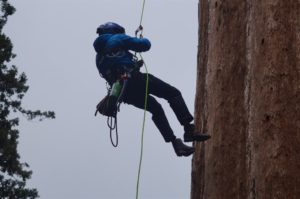 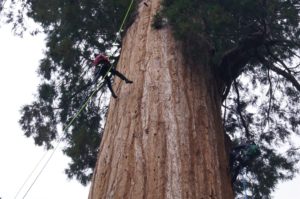 Then there were those watching the climbers from the ground: 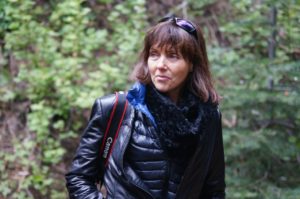 While climbers were climbing, interviews were taking place on terra firma. 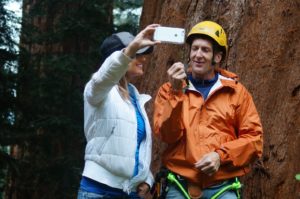 Jim Clark being interviewed by Katie Cleary about the tips of the branches which are critical for creating clones.

We explored the Waterfall Tree, which was not so easy to find, as it was hidden down a trail where much of the brush was already growing back.  But once you headed down the trail in the right direction, you could spot the Waterfall Tree from a distance. 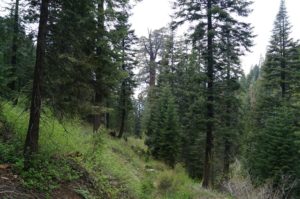 As one walked toward the tree, more and more of its gigantic outline came into view. 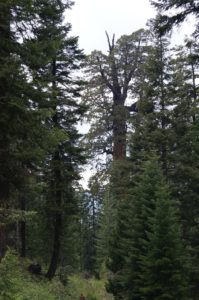 When we finally reached the Waterfall Tree, we found it to be larger than we had imagined. We explored its size relative our small sizes by posing our human figures at its base. 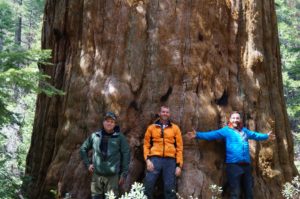 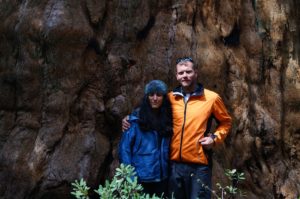 In the picture below, even I got into the posing action 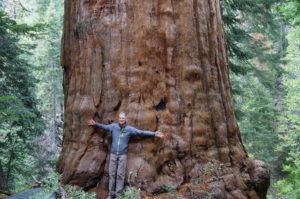 This tree was named the Waterfall Tree because on the opposite side of it was a stream with a waterfall, and the trunk on that side reached down almost to the water’s edge, where the three in the picture below were headed.

After our visit to the Waterfall Tree, we turned our attention to the Amos Alonzo Stagg Tree, further up the hill, so we could begin to set ropes and prepare for the climb the next day.  So check the May 24 post to learn about what happened the next day.