May 24 was the final day spent at Alder Creek grove in the Sierra Nevada Mountains as part of an expedition to collect and archive the genetics of some of the oldest, largest, and perhaps most important trees on earth – the coast redwoods and giant sequoias.  It was also the longest, most amazing and successful day of the expedition.  Here’s how the day unfolded:

Before we traveled up the mountain to Alder Creek grove, Gary Benz and Michael Bailey interviewed Tim Smit, Eden Project co-founder, and his sons, Sam and Ed, on the grounds of the Camp Nelson Lodge.

Eden Project participation on this expedition was very important as they have planted Archangel coast redwoods at their project site in Cornwall and are looking into the possibility creating additional Eden Project-like sites with international partners around the globe.  Be sure to read about the Eden Project in the Sources of Inspiration section of this website.

Camp Nelson Lodge was where most of the expedition climbers stayed.  It had a kitchen, dining room and beautiful room with two fireplaces, with sleeping rooms in a separate building. 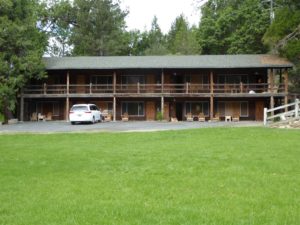 We then traveled back up the mountain, from 5,000 feet elevation at the lodge to 7,000 feet elevation where the Alder Creek giant sequoias were.  I walked down to the Waterfall Tree where the Bartlett Team was setting up to climb the huge tree.  You can barely see the rope lines in the tree that Jason Kappan is pointing to.

In the photos below, Jason Kappan and Jim Clark are preparing and labeling breathable bags to contain the cuttings that are gathered from the Waterfall Tree. 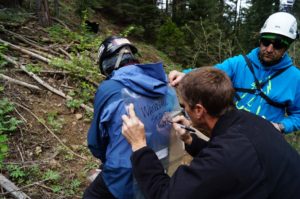 Heading up the gathering of cuttings from the Waterfall giant sequoia was Bo Burke, shown below at the base of the Waterfall tree.  Thanks for all your hard work, Bo. 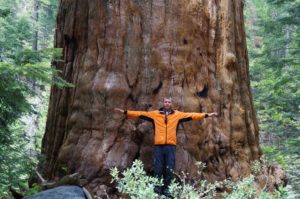 Next, it was over to the Amos Alonzo Stagg tree, a magnificent ancient tree over 3000 years old. 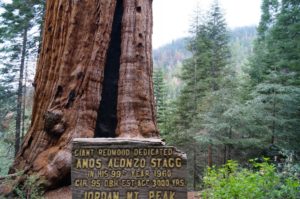 The purpose was to obtain cuttings from the very top branches in order to create clones of these giants with the same DNA so that these trees can be planted and preserved in an archive for future generations.

The Stagg tree, being over 3,000 years old and the 5th largest giant sequoia in the world by volume, is such a valuable specimen to preserve, that one can only hug and hold tight in hopes that our work today bears fruit and many young Stagg clones are produced for our children’s and grandchildren’s generations.  That is certainly the appreciation Jim Clark is expressing here. 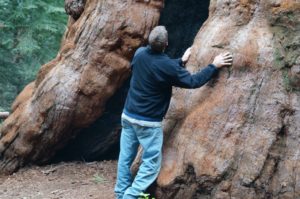 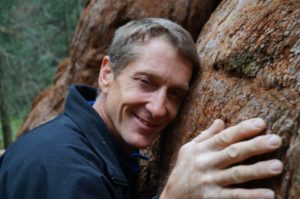 Below is a photo of the cross-bow used by Portland climber, Damien Carré, to get lines up into the tallest part of the tree. 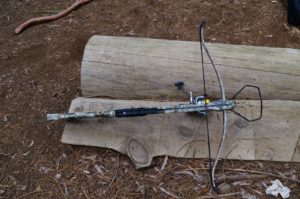 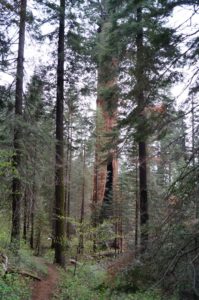 Damien Carré took the following video illustrating his view from the top of the Stagg giant sequoia.

With Damien Carré at the top of the tree and a line in place to get up there, Aaron Johns starts to ascend. 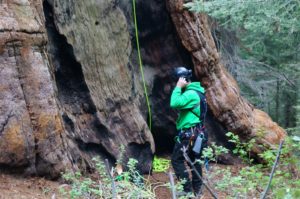 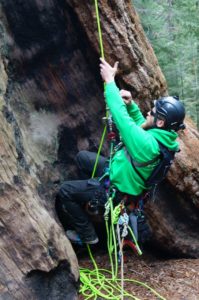 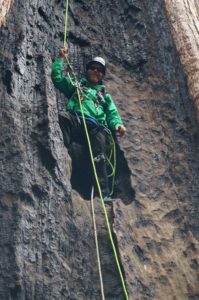 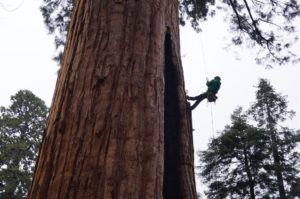 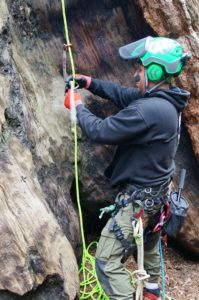 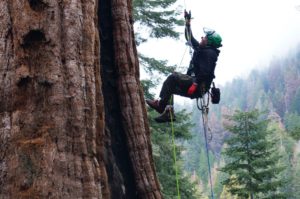 As the cuttings are dropped by the climbers at the top of the Stagg tree, Jim Clark begins to gather them up and pack them in breathable bags with wet towels and ice for the long journey from California to Michigan later that night. 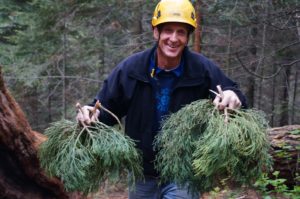 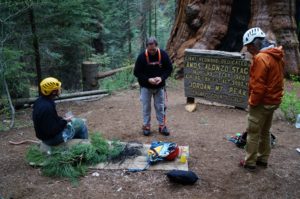 In the video below, Jim Clark talks about what constitutes a good giant sequoia propagation specimen:

And in the video below, Jim Clark talks about what it takes to propagate clones from giant sequoia cuttings into small seedlings:

Finally, we have enough cuttings and it’s time to get them to a California inspection station so that they can accompany Jim Clark on his flight back from San Francisco to Traverse City, Michigan at midnight tonight.

First down the tree is Damien Carré, who was also the first up the tree.  Here are a few photos showing his descent. 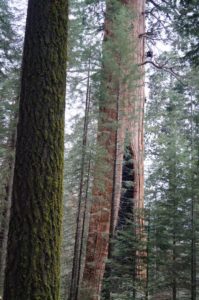 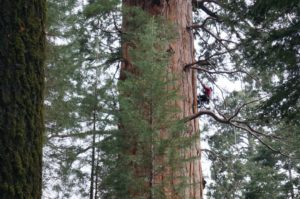 Soon people began to assemble back at the trucks to get packed up for the trip to San Francisco.  Sam returned from climbing and harvesting clone material from the Waterfall Tree and was all smiles about what she had accomplished for the day. 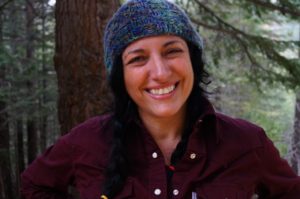 The trucks were loaded and a mad dash was made to get to the inspection station and to the San Francisco airport in time to get the precious harvested clone material to the lab in Copemish, Michigan where the cuttings could begin the rooting process. 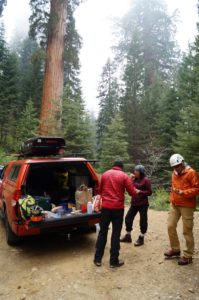 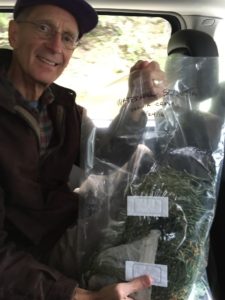 The photo below was received first thing the next morning and was an indication that we had succeeded.  Jim Clark had arrived overnight to the Archangel lab in Copemish, Michigan, with the Stagg and Waterfall cuttings, and they already passed inspection from a Michigan inspector!  WooHoo!!  SUCCESS!!! 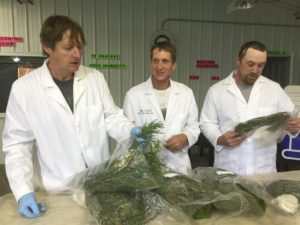 Thanks goes to all the climbers and support personnel who with hard work and determination achieved such a tremendous accomplishment!